Kilimanjaro’s glaciers are disappearing rapidly. This is due to warmer, drier conditions resulting in the glaciers, which are literally drying out or ‘sublimating’ (solid ice evaporating straight to gas). Much of this problem is caused by global climate change, but this is being made far worse by mass deforestation in the Kilimanjaro region for firewood, charcoal making, and agriculture. This deforestation is resulting in less moisture being available for Kilimanjaro’s glaciers, as well as making less water available for local people.

A glacier is a persistent body of dense ice that is constantly moving under its own weight. The term “glacier” comes from the French word glace (glah-SAY), which means ice.

Glacial mass is affected by long-term climatic changes like cloud cover, precipitation, and mean temperature. Glacial mass changes are considered one of the most sensitive indicators of climate change and are a major source of variations in sea level.

A glacier on Mount Kilimanjaro, Tanzania, in 2010. Credit…Chris Jackson/Getty Images

Glaciers begin forming in places where more snow piles up each year than melts. The snow begins to compress or become denser and tightly packed soon after falling. It slowly changes from light, fluffy crystals to hard ice pellets, which is buried by new snowfalls, compressing it further. It becomes a dense, grainy ice called firn. Layers of firn build on top of each other as the years go by.

Once it grows thick enough, the firn grains fuse into a huge mass of solid ice and the glacier begins to move under its own weight. The heavy glacier exerts so much pressure that the firn and snowmelt without any increase in temperature. The meltwater makes the bottom of the heavy glacier slicker and more able to spread across the landscape.

The four notable Glaciers of Kilimanjaro include Furtwängler Glacier, Rebmann Glacier, Credner Glacier, and Arrow Glacier. The estimated age of the glaciers is around 11,700 years old. However, some areas are vulnerable to weather and sunlight, which has led to melting and refreezing, and are estimated to be around 800 years old. 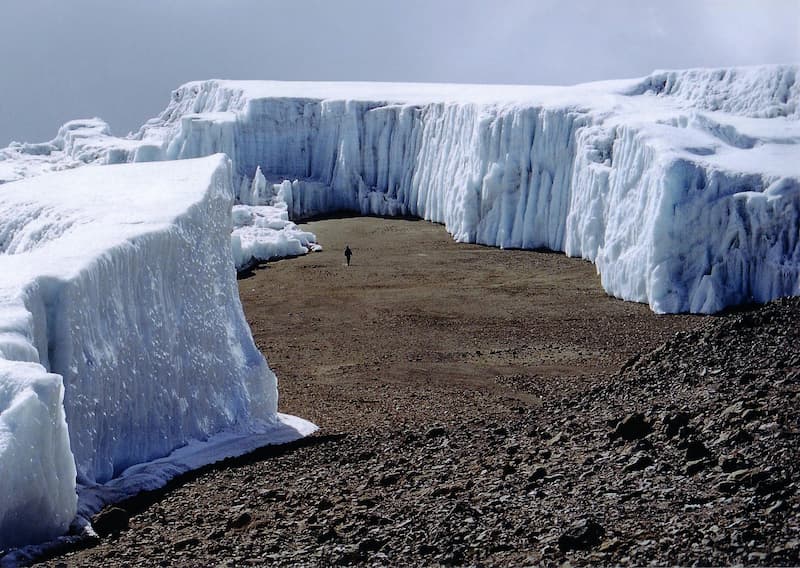 The retreating vertical walls of the Furtwangler Glacier, in the inner crater

Even though Kilimanjaro is located in the tropics, the cold and dry air at the top of the mountain has sustained large quantities of ice for more than 10,000 years. However, Kilimanjaro’s peaks may soon be ice-free. According to NASA, the mass of ice on the summit decreased by more than 85% between 1912 and 2011. It is no longer a question of whether the ice will disappear, but when.

The World Meteorological Organisation (WMO) recently released a report called The State of the Climate in Africa 2020 revealed that Kilimanjaro’s rare glaciers were retreating rapidly and could disappear altogether by 2040. The report noted that between 2014 and 2020, the Furtwängler Glacier shrunk 70%.

“During 2020, the climate indicators in Africa were characterized by continued warming temperatures, accelerating sea-level rise, extreme weather and climate events, such as floods, landslides and droughts, and associated devastating impacts. The rapid shrinking of the last remaining glaciers in eastern Africa, which are expected to melt entirely in the near future, signals the threat of imminent and irreversible change to the Earth system,” said WMO secretary-general Petteri Taalas.

Tanzania is our home and the Nature Discovery team are dedicated to making a positive impact on the environment and the communities that live around it. We have developed protocols and practices, which include reducing our carbon footprint, practising Leave No Trace, reducing the burden of plastic pollution, and supporting the growth of green transport.

These protocols have led to Nature Discovery being awarded the UNCTAD award (presented by Responsible Tourism Tanzania) for ‘most responsible tour operator in Tanzania’ in 2018 and 2019.

If you want to learn more, check out Nature Discovery’s commitment to sustainable business practices.

If you want to experience the glaciers on Mt. Kilimanjaro and you want to have the best eco-trekking experience, book with Nature Discovery today.

As Kilimanjaro specialists with 3 decades of experience, we have devoted endless time and energy into making our climbs the most organized, responsible, and professional.

Contact Nature Discovery now to find out more about treks and availability.

Nature Discovery were a phenomenal outfit: professional, knowledgeable and excellent fun. We climbed in a huge group to set a Guinness World Record for the highest altitude football game ever played (Equal Playing Field) but the silent heros and heroines were Nature Discovery crew. Every single individual, from the guides to the porters to the cooks to the sanitary crew made our dreams come true. If you want an ethical, professional, well managed, fun loving outfit, go with Nature Discovery!

Kilimanjaro’s glaciers are disappearing rapidly. This is due to warmer, drier conditions resulting in the glaciers, which are literally drying out or ‘sublimating’ (solid ice evaporating straight to gas).