Ol Doinyo Lengai, situated near the shores of Lake Natron in the Great Rift Valley, is the only volcano on earth ot erupt ‘cool’ lava. The temperature of this lava is “only” about 600 deg. C., compared to ‘normal’ lava (from 1,500 to 2,000 degrees C). Lengai rises majestically about 2,000m from the East African Rift Valley depression, to a summit elevation of 2,890m. To the Maasai people, it is the “Mountain of God”, which is also the meaning of the name. 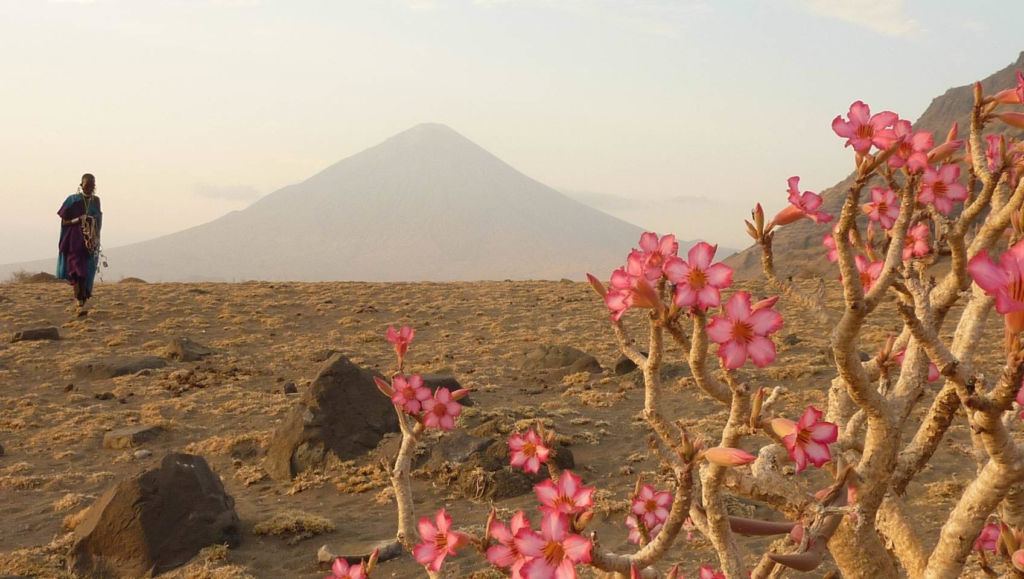 The Desert Rose (Adenium Obesu), blooms in stark contrast to its’ surroundings in the dry season landscape near Ol Doinyo Lengai

Ol Doinyo Lengai is the world’s only active volcano known to erupt carbonatite lava, a sensational discovery scientists made as recently as the 1960s: the lava it erupts is NOT silica based like all other lavas found worldwide, but on natroncarbonate. Lengai’s cool lava does not emit enough light to glow during day; only at night, and it emits a dull reddish glow. Also because of its peculiar chemical composition, the lava is extremely fluid and behaves very much like water, with the exception that it appears black, like used motor oil. After it is cooled it quickly alters and forms a whitish powder on the surface when exposed to water.

Nature Discovery has been at the forefront of offering tourist expeditions up Lengai, and we have worked with a number of vulcanologists including Joerg Keller, the world’s foremost Lengai vulcanologist. We’ve helped to collect samples and report news on Lengai over the years.

Geologically, the present-day cone of the volcano was constructed about 15,000 years ago. Historical eruptions have been moderate to small explosive events. In addition to its intermittent explosive activity at intervals of typically 30 to 50 years, numerous natrocarbonitite lava flows have erupted from vents on the floor of the active crater. The depth and morphology of the active (northern) crater have changed dramatically during the course of historical eruptions, ranging from steep craters walls about 200m deep in the mid-20th century to shallow platforms mostly filling the crater.

Violent eruptions cleared the crater in 1966/67, and by 1983 the crater had mostly been filled again. From late 1998 until March 2006, lava had begun overflowing over the crater rim and spilling down the south face and northeast face. In March 2006 there was a violent explosion in the northern crater which opened up a pit about 50 meters deep, and a channel where a large natrocarbonatite lava flow spilled down the western face and pooled in a col between Lengai and the Rift Valley Escarpment. 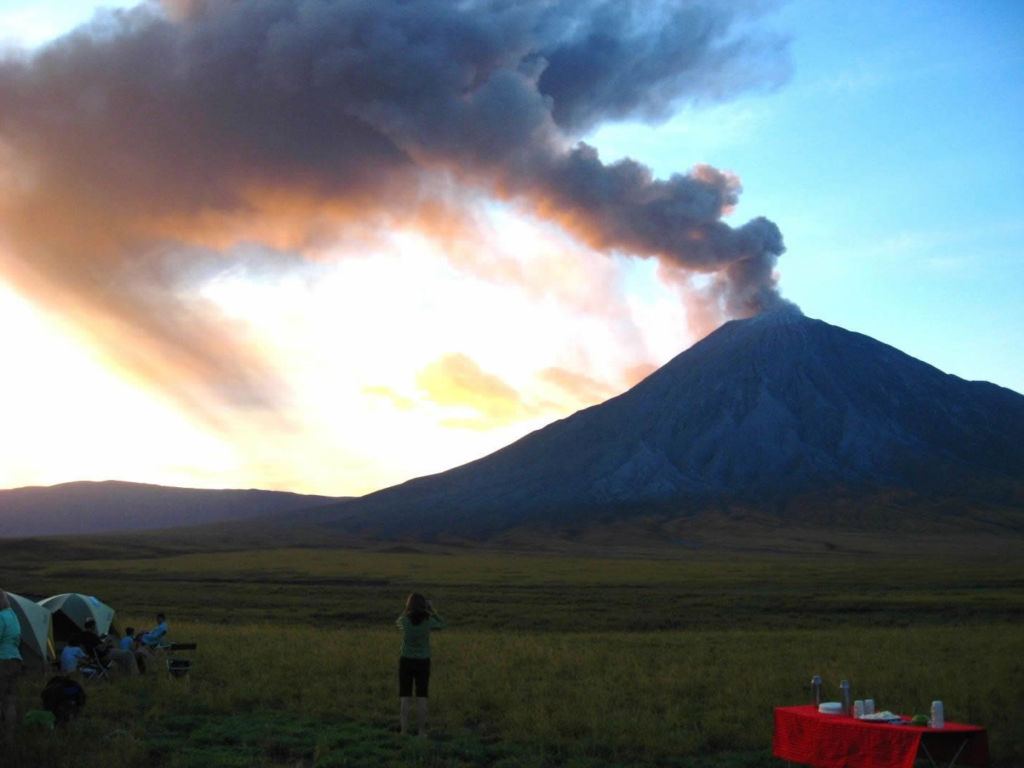 An eruption during Feb’08, viewed from a campsite in the Ngorongoro highlands

Liquid natrocarbonatite flows continued until August 2007, when a series of strong earthquakes deep in the earth’s crust set off a dramatic eruption cycle which saw the liquid natrocarbonatite flows change in chemical composition and colour, to ashy emissions and violent explosions sending projectiles airborne, repeating a cycle which last occurred in 1966.The result of the eruptions from August 2007 to April 2008 opened a ‘massive pit in the north summit.
Lengai is opened again for climbing in June 2009, over a year after the last explosive eruptions ended. The original route is being used, except now it’s another 150 meters higher to get the edge of the crater rim! It’s not quite as exciting as prior to August 2007, because one cannot get as close to the volcanic activity.

Now, standing at the crater rim, you can peer into a massive crater about 300 meters across and 200 meters deep, with new natrocarbonatite eruptions visible at the bottom of the crater.

The usual climb of Lengai starts at about 2am (after a midnight wakeup, breakfast, then a 1 hour drive to the trailhead). It takes most people from 4 to 6 hours to reach the crater rim (near the summit), so they get there at dawn or just after. Then the descent takes most people from 3 to 4 hours. You do not need special climbing skills, but you do need to be fit and very determined to do it. The terrain is steep and exposed, and it’s a rigorous 1,700m+ alpine adventure route. Once you reach the edge of the crater rim on the active north crater, you walk along that rim and up to the true summit, which sits on a ridge which separates the active north crater from the south crater. The 30 minute climb to the summit affords you panoramic views toward Ngorongoro, Empakai and the Highlands to Lake Natron, and even you can see Kilimanjaro and Mount Meru. We offer an option to climb during daylight hours, and set a simple camp is set in the south crater, which allows you to break up the ascent and descent, relax in the afternoon and take in the incredible sights. Once darkness falls, it’s possible to peer into the active Crater to get a chance to see the faint dark red glow of the lava in the north crater.

We offer various treks in the vicinity of Lengai, including the Ngorongoro Highlands trek from Empakai Crater to Lake Natron. For more information and suggested itineraries, please email us. 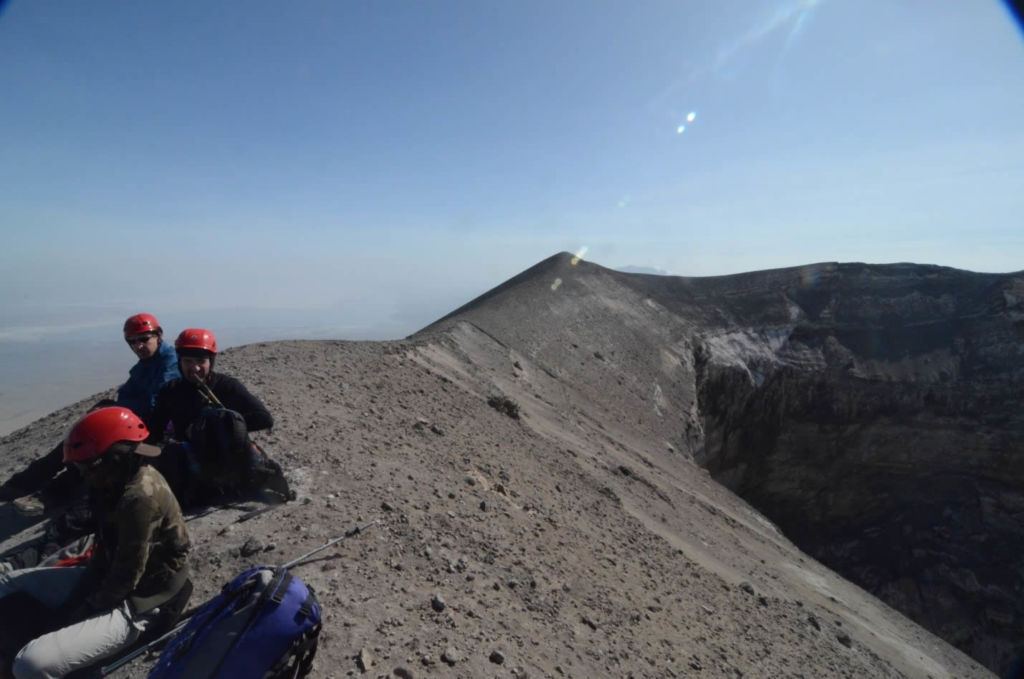 Taking a rest at the ‘new’ Lengai Crater rim

If you want to experience Kilimanjaro or our other Tanzanian Tours and you want to have the best eco-trekking experience, book a Group Trek with Nature Discovery today

TREK FAQ
WHAT YOU NEED TO KNOW
READ MORE