Things to consider when planning your route: 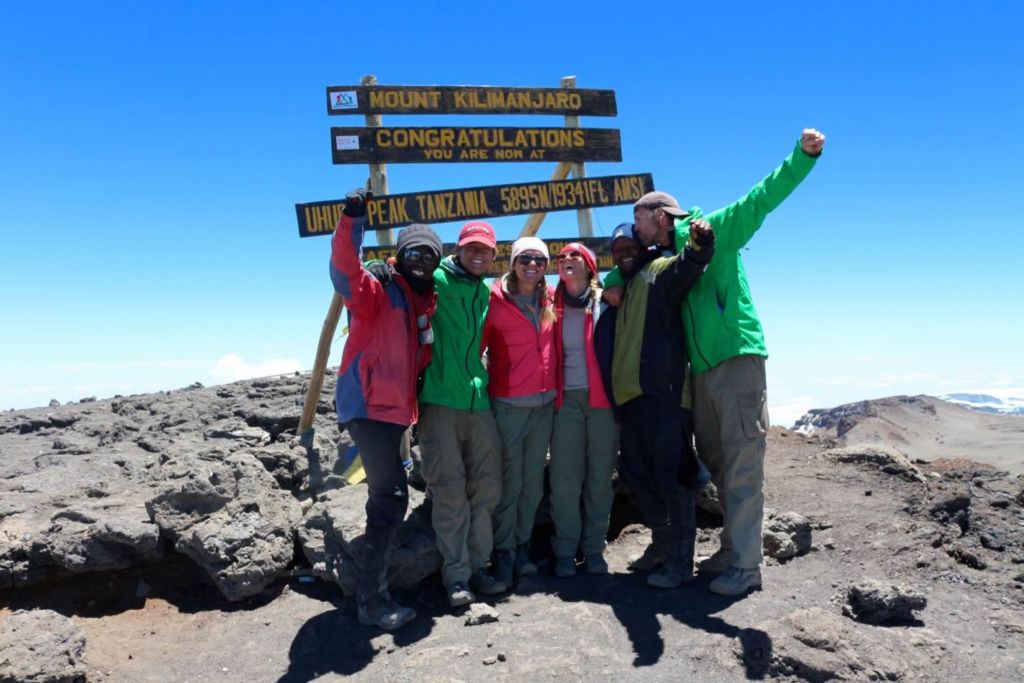 There are many factors to consider in planning the best Kilimanjaro route for you!

NUMBER OF DAYS TO CLIMB

You’ll likely only climb Kilimanjaro once, so you may as well do it ‘right’. The best way to do this is by choosing a trek which allows enough acclimatization time to reach the summit safely. The single most important factor on whether you reach the summit or not depends on the number of days you take. The park minimum is 5-days – that’s 3.5 days to the summit. Only about 50% of those on 5-day climbs reach the summit. Of the roughly 1,000 climbers we take up the mountain each year, we average eight days.

We regularly run nine and ten-day treks which include the experience of camping next to the glacier at Crater Camp. The results are dramatic when comparing the ratio of summit success rates to the number of days on the mountain.

For Nature Discovery, the average summit success rates are:

It makes a significant impact on summit success rates to take extra days.

Day 1 Join Gary, Chief Project Manager at Nature Discovery, as he attempts to summit Kilimanjaro with a small group of guests.
Day 2 Today the group hike up to 3859m, to Shira 2 camp.
Day 3 Gary and his guests practice the step-rest method as they trek to Lava Tower at 4600m.
Day 4 Our intrepid explorers enjoy amazing views of Kenya and Amboseli National Park, trekking 11km for a total of 8 hours to Pofu camp.
Day 5 The group passes Giant Lobelia and lots of caves as they make their way to Third Cave Camp.
Day 6 Spirits are high as the group trek to base camp!
Day 7 A midnight start to reach the summit!
Day 8 After a very slow walk enjoying the scenery, wildlife and plants, the team arrive at Mweka Gate.
TREK FAQ
WHAT YOU NEED TO KNOW
READ MORE

There are six initial approach routes, described here below counter-clockwise from west to east:

There is a circuit of routes traversing the Kibo massif in the alpine desert (ranging from about 3,500 to 4,000 m), and from this circuit on upwards there are only three summit route choices. The Northern Circuit is by far the least used route on Kilimanjaro, and is home to the last vestige of true wilderness left on Kilimanjaro.

The Southern Circuit is essentially the continuation of the popular Machame Route following the east-facing Mweka (Barafu Camp) route to the crater rim at Stella Point. This route to the summit receives more than 80% of all summit foot-traffic. Most of the rest of the summit-goers pass via the Marangu Route via Gillman’s point before skirting around the south crater rim to Uhuru Peak.

The Western Breach is the third and last summit route and gets a tiny percentage of the summit foot traffic. It’s a steep scramble from camp at 4,900 m (Arrow Glacier Camp) to the crater rim at 5,900m and is a true alpine-adventure style scrambling route, including rockfall risk. We’ve imposed our own restrictions on this route, in order to ensure the group is relatively homogenous and has prior experience with this type of terrain. We provide mountaineering helmets for all participants who ascend the Western Breach.

You must decide whether you want to do an overnight hike to the summit, or make your attempt during the day. You can either spend a night in the Crater Camp or take an extra night at your highest camp (thus making your final descent day longer). The Crater Camp is at 5,800m (19,000′), so taking enough time is essential to be able to camp here. Treks must be a minimum of 9 days to include a night in Crater Camp.

The ‘normal’ way to climb Kilimanjaro is to have the last camp at about 15,000’ (4,600m) and do an overnight ascent to the summit, leaving camp at about midnight. This makes for a 12-17 hour trekking day…. explaining part of why Kilimanjaro has such a reputation!

The other option is to trek up to the summit during daylight hours and camp in the crater. The overnight at crater camp does make for a challenging sleep, but trekkers can experience much more of the summit, glaciers, and central (Reusch) crater. If you want to trek to the summit in daylight but NOT sleep at Crater Camp, we can arrange this by spending two nights at the high camp. This involves a longer final trek to the gate, as you trek from the high camp to the gate.

We think some of the very best route combinations are:

* Lemosho route or Shira route 7 to 10 days via the Northern Circuit, with or without Crater Camp (on 9 or 10-day treks)

* Umbwe Route 6 or 7 days via the Western Breach (no Crater Camp) – the most difficult and least-used combination of routes up Kilimanjaro.

The toughest part of any Kilimanjaro trek is the final ascent to the summit, which is most often done overnight. The reason for this is because of the time it takes to get from the high camp to the summit and back down, so trekkers need to depart early in order to have enough time (and daylight) to reach the final camp at the end of the day.

If you happen to be trekking to the summit on the night of the full moon, the predawn hours from 3am to 6am find the trail devoid of moonlight, because the summit trail ascends the east side of the Kibo massif, and that massif blocks the setting moon, casting you into complete darkness after 3am! Thus, it’s much better to arrange the summit attempt three days after the full moon for optimal moonlight on the summit trail during the entire night. A great website to follow is https://www.timeanddate.com/moon/@157452 for all sorts of information on moonrise, moonset and even the location of the moon on a particular day.

The best times to climb for weather (avoiding rain) are January to early March and July to mid-October. There’s a long, dry winter and a green season with two rainy periods at each end. December, January, February and March are the warmest months, with clear mornings and evenings, and clouds building during the day that occlude the summit in the early afternoon hours. The predictable patterns of weather make it a good time to climb.

The main rainy season lasts from the beginning of April to early June. At this time, dense cloud formations massed over the mountain reduce visibility, and you can expect frequent snowstorms on the summit and heavy rains on the lower slopes.

The longest and driest season runs from mid-June to mid-October. During this time it can be very cold at night. It’s Kilimanjaro’s “winter” and there’s a persistent dripping belt of clouds encircling the mountain above the forests and the moorland contour. Above the clouds, it’s usually clear and dry, and this is one of the best times to plan the trek.

In late October, the clouds finally give way to rain, and until the middle of December, the mountain is shrouded in heavy clouds, with persistent showers from base to summit.

The best months to ascend the mountain are January, February, August and September. Avoid climbing during the April-May heavy rain season, and November (the short rains) if you can.

In the best months for climbing, it’s best to avoid the Machame Route, and on any route avoid starting your climb on a Saturday or Sunday to avoid “crowds”. Also do not reach the summit on a full moon (reaching the summit 2-4 days AFTER the full moon is best for a full moonlight summit, for lighting the summit trail during the night).

Although it varies by season (see above), some general rules apply for weather and temperatures on Mt. Kilimanjaro. Moshi, the nearest town, is always hot. Sitting at 950m elevation, it is one of the warmest cities on Earth (measured in diurnal average temperatures), with averages over 30 degrees C by day and from 15 to 17 degrees by night throughout the year.

The climbing routes start generally between 1600 to 1800m, and always are much cooler than Moshi, partly because of altitude differences but mostly because of cloud cover. It’s often 10 degrees cooler at the gates. The forest zone (from 1600 to 2000m) is cool, damp/wet, with daily temperatures in the low to middle 20’s and night-time temperatures in the single digits.

The heather/moorland (2,000 to 3,500m) has greater daily fluctuations, and it often warmer during the day if in sun (up to 25 degrees), and colder at night (down to freezing).

The alpine desert (3,500 to 4,500m) has even more daily radiational heating and cooling, with daily highs up to 20, and nighttime always below freezing.

The summit zone (over 4,500m) is always below freezing. On sunny days, radiational heating from the sun creates a ‘microclimate’ up to 2m from the ground which can make it feel quite hot during the day. Night-time temperatures range from minus 10 to minus 30 depending on the season.

We offer three main options for the specifications of gear and services.

The majority of our treks are run in the ‘Superior’ option, but we also offer a slightly simpler and less expensive option, called ‘Lite’. The ‘Lite’ option has a lower weight allowance for each climber, uses smaller dining chairs and a smaller mess tent. We also offer a “Hut” option on the Marangu route where accommodation is in huts and not tents.

On the flip side, we offer optional luxury gear like walk-in sleeping tents with frame beds and solar lighting systems, hot shower services, mess tent heaters, sparkling wine service, and other indulgences! On any trek, we provide the same quality and commitment to guiding and porter ethics, and all treks get the same top safety gear and standards.

If you choose a private trek, you can choose all the details of your trek, including your own dates, route combination, and level of service & gear specs.

We also offer scheduled group departures, with two options throughout most of the year:

Remember that we are happy to put you in contact with one of our agents based in your area if you’d rather deal with a company close to you. If that’s not possible, our own Kilimanjaro experts will be happy to assist you in choosing the best route.

READ OUR BLOG SERIES
KILIMANJARO TREK DIARY
Join our Chief Project Manager at Nature Discovery as he Attempts to Summit Kilimanjaro with a Small Group of Guests.